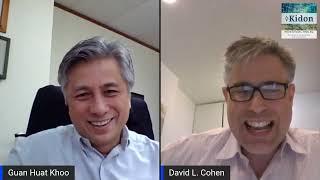 My next talk is with Guan Huat Khoo.  I first met Guan Huat while at Vringo when I was developing a global SEP monetization campaign in which he and his firm played an important role.

Guan Huat is a litigator with over 30 years of experience, joining Skrine in 1993.  He is frequently called upon to act as senior counsel, in both commercial and civil litigation and arbitration disputes. Guan Huat also advises both financial and non-financial institutions on regulatory and compliance matters. He is an adjunct faculty member of The ICLIF Executive Education Centre (part of Asia School of Business – in collaboration with MIT Sloan Management) and regularly speaks on its behalf on corporate liability and corporate governance matters.  He has appeared as an expert witness on Malaysian law in several matters, including arbitration proceedings, in the United States and in Singapore. Guan Huat is one of the most highly regarded IP and Patent litigators in Malaysia.

Our discussion focuses on the IP system in Malaysia; how general and patent litigations are handled; and how the various global trends in IP and international trade impact the IP scene.

[UPDATED] Disclosures and Enforceability of Standard-Essential Patents: An ...
Scroll to top